Modern manufacturing techniques have turned mass-production into an art form, and we now live in a world where almost every manufactured object comes off a production line, optimized at every turn for mass-production. In many markets this can be an effective strategy for getting goods made quickly and cheaply, both of which deliver benefits to the end user.

However, in the case of very large machinery a different approach is needed to avoid the end-user being forced to alter its operating profile to fit the product, rather than the other way around.

Our market demonstrates a range of unique elements. For example, no two ports are the same in terms of their cargo volumes, blueprint, or local climate. The practice of getting extremely large cargo shipments from the quayside onto ships – and then the reverse – offers little room for a standardized heavy-duty machine.

Since 1974 Siwertell screw-type unloaders have offered the cleanest and most efficient dry bulk unloading systems available on the market. These were followed into production by loading systems, road-mobile and port-mobile unloaders and full terminal systems, all bearing the Siwertell hallmarks of efficiency, reliability, high capacity and minimal environmental impact.

With the exception of standardized road-mobile and port-mobile unloaders, all large Siwertell machines are tailor-made to suit the requirements of the dry bulk material-handling market.

The luxury of space

One of the major limitations at many ports is that of space. Today’s ports are designed with at least a 25-year timescale in mind, but almost all of them struggle to accommodate the ships built today. A travelling rail loader offers the most efficient possible loading profile, as it can reach all of a ship’s holds with no need to move the vessel along the quay. This will become doubly important in the years to come, when more vessels come to rely on plug-in shore power systems.

Yard space is a luxury, and many ports cannot afford to dedicate large amounts of it to a rail system that spans the entire quay. But there are ways of addressing this. In one example, Siwertell was contracted by mining company SIMEC Mining (formerly known as Arrium Mining) to provide a large 4,200t/h ship loader to Whyalla Port, in Australia, which would double its iron ore throughput to 12 million metric tons per year. Here, the quay was long enough to allow a rail-mounted system to be installed. However, even with the rail in place, thanks to the length of the berth the machine would not be able to travel the entire length of the ship.

When Siwertell elected to fabricate, assemble and test the entire 428-metric ton iron-ore loader in China, before bringing it to the port on a heavy-lift vessel, the company elected to fit the machine with a travelling, telescoping, and luffing arm design. This meant that the loader could reach into each of the vessel’s holds, without having to add additional quay length or move the vessel along the berth. 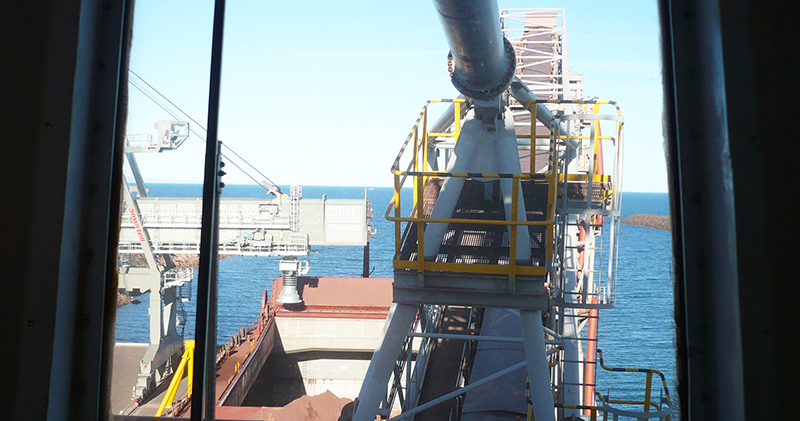 Good in a tight spot

As well as space limitations, a lot of ports have weight limitations. Many terminals are not necessarily designed for the growing infrastructure needs that expanding populations place on them. At the Bontang fertilizer terminal in Indonesia, owners PT Pupuk Kaltim required an additional ship loader, but thanks to the weight-bearing limitations of the jetty, required a tailored, lightweight solution.

Siwertell duly designed a bespoke, low-weight loader, able to handle high volumes of cargo without overloading the quay. The quay design also necessitated an unusually high tripper, which Siwertell was able to incorporate into its design work. Once installed, the machine totalled 260 metric tons, as well as the 42-metric ton tripper.

Perhaps one of the greatest examples of Siwertell’s problem-solving prowess today operates in Oak Creek, Wisconsin, in the US. At the Port of Milwaukee, a Siwertell ST 640-type machine alternately unloads up to 1,000t/h of limestone using a vertical screw conveyor and loads 500t/h cargoes of gypsum onto barges. The limestone is used for cleaning the flue gas from the local Oak Creek power plant, while the gypsum, generated as a by-product of the process, is exported and used for various industrial processes.

Bechtel Power Corporation specified that both unloading and loading technologies be combined into a single unit, which allowed Siwertell to reduce the total width to less than half that of two machines side-by-side.

Rather than trying to fit a square peg into a round hole, Bruks Siwertell takes pride in the fact that almost all of its products are tailor-made for the scenario at hand. We believe that, as an engineering company, it is up to us to build for the customer’s needs first.

A quarter of a century in the making, but the wait is worth it
Contact