In 1910, the African-American author, Booker T Washington, who was himself born a slave, said: “I am not prepared just now to say to what extent I believe in a physical hell in the next world, but a sulfur mine in Sicily is about the nearest thing to hell that I expect to see in this life.”

He was in part referring to the horrific conditions of the boys enslaved into working in the mines, but also to the commodity itself. Corrosive, polluting and hazardous, with the potential to explode and cause fires, are all good reasons for treating sulfur with caution.

It is now the 21st century and the maritime industry’s relationship with sulfur is changing. Incoming regulations will reduce sulfur emissions in ship exhausts from 3.5 percent to less than 0.5 percent. The effect of these regulations, it is hoped, will be to curb the negative effects of sulfur on the environment and on human health, which research shows, is more problematic near ports, harbors, and busy shipping channels across the world. The regulations also add to existing local legislation in and around China’s various rivers, the North Sea, and the coast of North America.

However, while undesirable in the air we breathe, sulfur is still a vital commodity in powder and grainy form. It is extensively used in industrial chemistry, construction and agriculture, and has to be handled and transported somehow.

When bulk carriers arrive at terminals with holds full of the distinctive yellow cargo, crackling from its containment, port operators are understandably keen to unload it carefully. At the very least keeping it from being dropped into the water or on the quay, or stirred up into toxic dust clouds during unloading, causing a potentially serious health hazard to workers nearby.

As a result, traditional grab cranes, which have been used to handle sulfur for many decades, are out and fully-enclosed systems – which are more environment-friendly and prevent the cargo from being spread around or spilled – are in.

The potential to explode

But there is a problem. Once sulfur is contained, it poses a major risk to its handlers in the form of ‘hot spots’ creating the potential to explode and cause fires. This is where Siwertell can take pride of place at the quayside, as the only company able to provide safe, environment-friendly, totally-enclosed sulfur unloaders and conveying systems.

Siwertell machines have been expertly designed to unload virtually any dry bulk material, including those that present hazards. All Siwertell unloaders, delivered to handle sulfur, are fitted with the Siwertell Sulfur Safety System (4S). It the result of several years of research, modelling and testing, and multiple systems in the field speak for themselves.

The 4S detects and extinguishes fires early, shutting down the system to stop their spread, and safely containing them before they can become a full-blown blaze. It does this by spraying water on the cargo at the inlet feeder and at conveyor transfer points. An automatic system lubricates and cools the end and intermediate bearings to reduce the risk of ignition.

Fire detectors are installed along the length of the conveying line. They automatically start the water spray fire-extinguishing system and stop the conveyors to prevent a fire from spreading to storage areas.

The last-resort safety feature, the explosion-proofing, is probably the most important of all. In a grenade or bomb detonation for example, the deadliest aspect is not the blast itself, but the shrapnel; and with a fully-enclosed bulk cargo unloader, there is a great deal of metal between the sulfur cargo and the surrounding staff, machinery, and property. 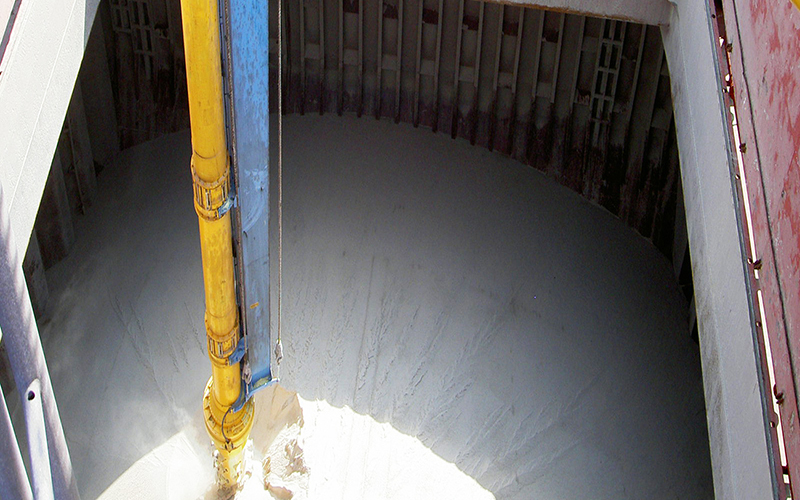 Transforming the Port of Paradeep

Eliminating the poor health effects of sulfur on harbor staff at the Indian port of Paradeep, in Odisha, is just one of Siwertell’s success stories.

Part of the KK Birla Group and the OCP Group of Morocco, Paradeep Phosphates (PPL) is a major manufacturer of phosphatic fertilisers and ranks as Asia’s second largest producer of diammonium phosphate (DAP), at its plant close to the port.

Facing huge environmental problems at its jetty, PPL was looking for a new ship unloader. After a visit to a Siwertell installation in Australia, PPL was convinced that a continuous, screw-type Siwertell ship unloader was the answer to its needs and in 2005, ordered a rail-mounted ST 640-D unit. It has the capacity to discharge sulfur from vessels up to 60,000 dwt in size, at a rated capacity of 1,600t/h.

Following this agreement, in 2011, Siwertell contributed to a considerable increase in throughput at the Indian Farmers Fertilizer Co-operative Limited (IFFCO) terminal, also in Paradeep, when the company replaced a grab crane previously used at the port with a large, rail-mounted ST 790-D high-capacity unloader.

Able to unload sulfur from vessels up to 75,000 dwt at 1,800t/h, the fully-enclosed Siwertell unit also prevents any pollution from dust emissions, further improving the environmental conditions at the port.

Both PPL’s and the IFFCO unloader are designed to withstand everything that sulfur can do to a machine. They are fitted with a stainless-steel vertical screw conveyor, designed to prevent corrosion and feature Siwertell’s unique 4S safety system to manage the risks of explosion and fire. Both unloaders are also able to handle different commodities, such as rock phosphate.

As well as the two unloaders at the Port of Paradeep, Siwertell has delivered many sulfur-handling installations, including road-mobile units, around the world.

Sulfur remains a hazard for operators, and it is unwise to get too close. But Siwertell machines provide a safe, fast, and vital service helping to secure the future use of this volatile, but valuable material.

Not all ship unloaders are created equal