Africa builds up its port technology base | Bruks Siwertell

Africa builds up its port technology base

In building capacity, African countries have the opportunity to ‘leapfrog’ to the best dry bulk handling systems available on the market, enabling growth and development. By using mobile ship unloading technology, even ports with little or no infrastructure can benefit.

According to the African Development Bank Group (AfDB), rectifying Africa’s “vast infrastructure deficit,” will relieve a constraint on growth in African countries. Within this paradigm, it has the opportunity to build up capacity from a more technologically advanced starting point.

There are already a number of important examples of African nations “leapfrogging”, as the AfDB refers to it, developed counterparts. For example, the continent has circumvented wire telecoms entirely, straight to mobile phones.

Africa is also the only continent where cargo drones – non-piloted vehicles for moving important medical supplies and other non-military cargoes – are in routine use. Renewable energy in Africa shows exorbitant potential, too. The International Renewable Energy Agency (IRENA) says that Africa could provide 40 percent of the world’s global solar power, and 10 percent of its wind power.

There are still barriers which need to be addressed, but it may be that, like with telecoms, African nations can jump ahead to the state-of-the-art – and in so doing, bring about a better future for themselves, in a way that will turn out, paradoxically, to be more cost-effective.

From a dry bulk imports perspective, food security is one of Africa’s most pressing concerns. Grain, in terms of import volumes, takes the top spot, on a long list of cargoes including coal, salt, cement, sulfur, alumina and fertilizer.

Over decades, Bruks Siwertell has developed systems for handling these cargoes, with a range of ship unloaders designed to suit operations in the most cost-effective, efficient way. One of them is the Siwertell road-mobile unloader, which features a low weight compact design, able to handle large volumes of cargo at sites with virtually no infrastructure. 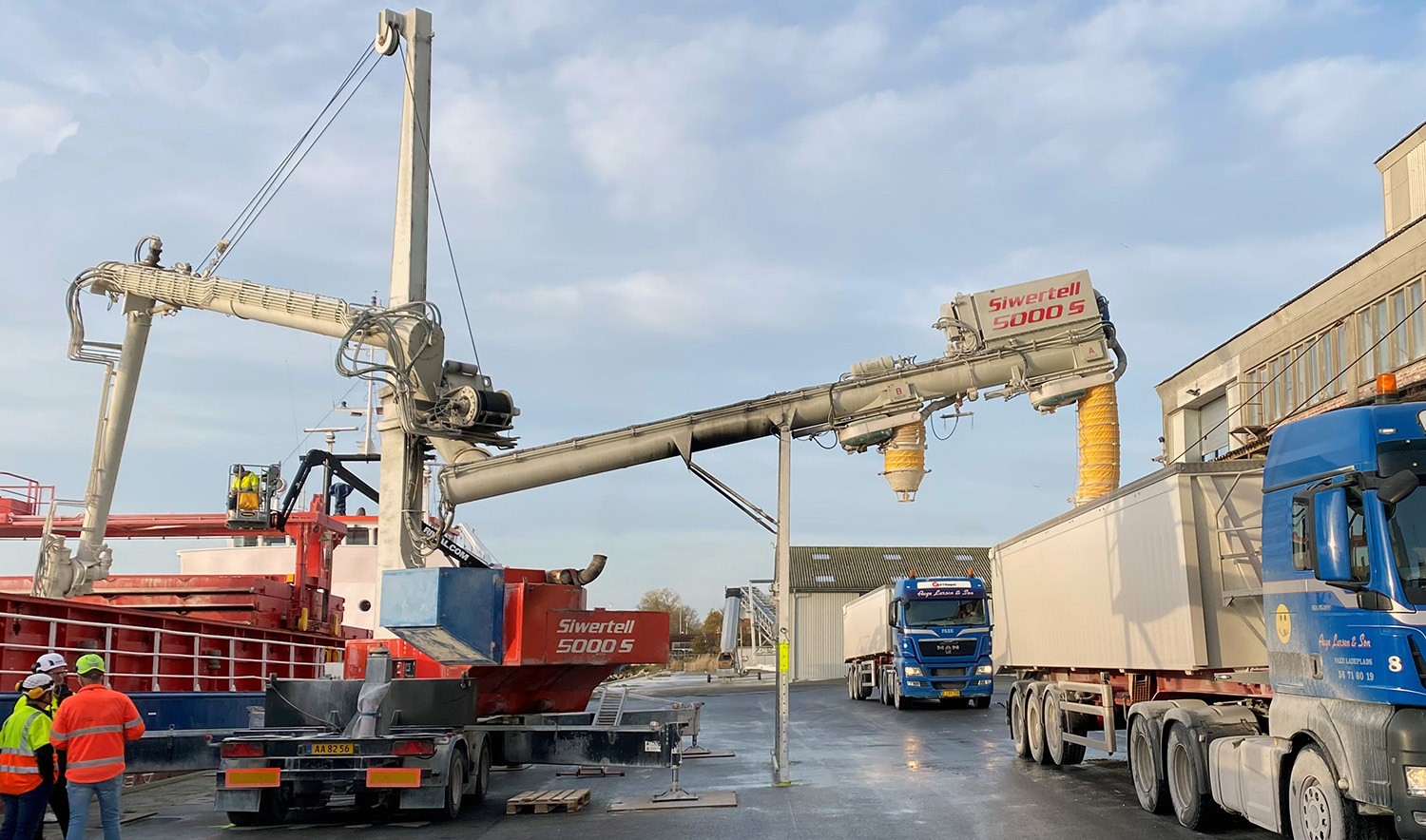 Many African countries are modernizing at breakneck speed, and while it may be efficient to have a large-scale rail- or turret-mounted Siwertell unloader operating on a dedicated quayside, this is not always an option. The road-mobile unloader can deploy and repack in less than an hour, making it ideal for meeting vessels as-and-when needed. Compounding this flexibility, mobile unloaders can switch freely between dry bulk materials; an attribute shared with all Siwertell unloaders.

“Our mobile unloaders are perfect for ports that need to keep the jetty clear, they are also ideal in locations that lack essential infrastructure,” explains Jörgen Ojeda, Sales Director Mobile Unloaders, Bruks Siwertell. “For example, the cement market is quite unpredictable and demand may arise in regions that simply have not yet been developed, this could pose a serious obstacle to meeting that demand. Road-mobile unloaders can ‘hit the ground running’, enabling operators to start discharging vessels the moment that they have been unfolded.

“Siwertell road-mobile unloaders also have a reputation for being very reliable, often making them a preferred choice for repeat customers, but also for first time customers prioritizing quality and reliability over a slightly cheaper initial investment.

“In the long run, an initially lower-priced system might prove to be the most expensive one, as a result of longer downtimes, increased maintenance costs, including substantial spare parts requirements, and higher energy consumptions demands,” notes Ojeda.

Solution for every port

Siwertell road-mobile unloaders are available in three different sizes: the Siwertell 5 000, 10 000 and 15 000. The largest of which deliver a continuous rated unloading capacity of up to 500t/h and can discharge vessels up 15,000 dwt. A notable example of the latter is a Siwertell 15 000 S unit, which operates in Lüderitz, Namibia. Since its delivery in 2008, it has been used to handle sulfur for mining company, Skorpion Zinc.

Sulfur, used in the mining process for the production of pure zinc, is volatile and corrosive, posing significant pollution risks and handling challenges. Furthermore, Lüderitz is a busy fishing port, and protecting this industry from environmental damage was a key concern at the time of order. Also, installing a fixed unloader in the port was not possible as the quay needed to remain clear after each sulfur discharge operation.

Like all Siwertell unloaders, road-mobile systems are completely enclosed, eliminating spillage and minimizing dust emissions. They have also been designed to overcome the issues around sulfur handling with specially designed components and safety systems, such as the Siwertell Sulfur Safety System (4S). The system features water spray nozzles, explosion venting to direct hot gases away from personnel and property, spark and fire detectors, and a fire-extinguishing system.

“With all these capabilities combined, the Siwertell road-mobile ship unloader was an ideal choice, not just for the port, but for the commodity,” adds Ojeda.

According to the World Bank, there is enormous potential for agricultural self-sufficiency across Africa, with some of the world’s most fertile and productive farmlands. Currently however, those farmlands are used to grow high-value export crops such as coffee, cocoa, and cottonseed oil.

In addition, recent geopolitical tensions and wide-spread drought, have made matters worse, leaving Africa more reliant on imported grain than ever before. In view of this, grain ports and the efficiency of their dry bulk handling systems are critical.

Morocco, a gateway to the continent, is home to the largest port in Africa, Tanger Med, and further along the coast, lie the ports of Casablanca, and Jorf Lasfar. On the east quayside of Casablanca’s bulk terminal, two Siwertell ST 490 F-type ship unloaders handle import shipments of grain at a combined capacity of 1200t/h. They are ideal for the task, with zero spillage and a smooth conveying profile that prevents crushing, cutting down on waste and material degradation.

Each unloader features a double-bellows system, which, if needed, can load grain onto two trucks at a time, or four in total; but when not loading trucks, the systems feed grain onto a conveyor belt that runs parallel to the quay.

Some kilometers away, the smaller port of Jorf Lasfar features four Siwertell unloaders; two rail-mounted ST 490-F units, in a setup similar to the one at Casablanca, primarily for handling grain; and a pair of larger ST 940-DOB systems for handling coal, weighing in at 1,040 metric tons each.

With high continuous rated capacities of 2,400t/h for each unit, the two ST 940-DOB unloaders can empty a 120,000 dwt bulk carrier in just under two days, providing feedstock for the TAQA Morocco power plant. The machines handle all different grades and types of coal, meaning that TAQA, which buys its coal from a variety of sources, operates with maximum flexibility. 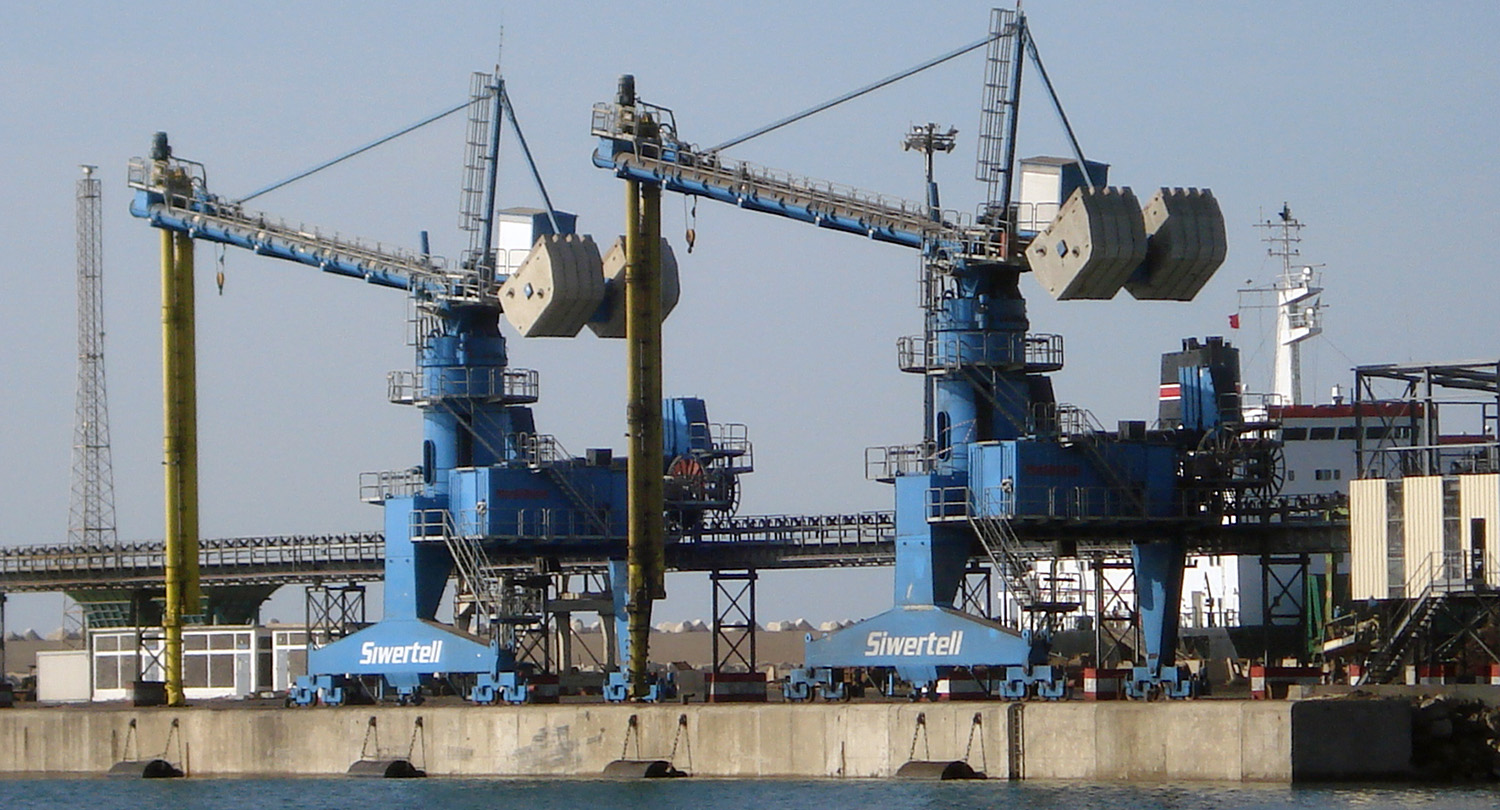 Support in the field

In Nigeria’s Apapa port in Lagos, two Siwertell 490 M-type ship unloaders serve the diversified agribulk company, Flour Mills of Nigeria. Delivered in 2001 and 2007, they handle multiple commodities including cement, fertilizers and wheat, switching freely between cargoes and discharging vessels up to 75,000 dwt.

Operating at a rated capacity of 800t/h each, the machines secure the import of grains for Lagos’ buoyant pasta manufacturing industry, which serves local and international markets. Dry bulk materials are fed onto an enclosed belt conveyor system running along the jetty, and covered by a layer of rubber. The rubber cover is lifted at whichever point on the jetty the unloader needs to access it, preventing the spread of dust both in unloading and in transit.

Recently, in 2021, Bruks Siwertell conducted a complete replacement on one of the two unloaders’ electrical control system, including programmable logic controllers (PLCs). At the time, Bruks Siwertell Electrical Surveyor Martin Sabel remarked on just how well the machines had been maintained, even after 40,000 hours in operation. “The operator put a lot of emphasis on ensuring their peak condition,” he said. “Forward-thinking when it comes to maintenance is a good strategy.

“Exporting parts and support to this site in Nigeria can be a challenge with different regulations and long lead times,” Sabel added. “This is especially important as the unloaders ensure almost continuous pasta production.”

With infrastructure projects springing up all over the continent, today’s Africa is a substantial importer of cement. Taken together, the top ten African cement importing countries, in 2021, would come third in the world after the United States and China, with over USD 1 billion in imports.

Handling comparatively little for itself – it was not in the 100 of cement importers globally in 2021 – Nigeria secures major cement volumes on behalf of neighboring landlocked countries, thanks, in part, to Siwertell unloaders.

Handling 800t/h of cement for Dangote Industries Ltd, in Apapa, is a Siwertell ST 490 F-type ship unloader. It operates along the quay using a robust rubber-tire gantry, alleviating the need for fixed rails.

Like all Siwertell unloaders, this unit leverages the unique advantages of the technology for handling its cargo, cement, with a fully enclosed unloading system and specially designed dust collector system that prevents clouds of cement dust and resulting pollution, keeping port personnel safe and reducing environmental impact.

“Apapa Port plays an important role as a key import route for vast volumes of grain, and other essential dry bulks, such as cement,” says Per Hansson, Sales Director, Bruks Siwertell. “With the presence of Siwertell technology, the port enjoys high flexibility, high capacities, market-leading through-ship efficiencies, and excellent environmental protection. It is not difficult to see why operators at this, and other locations, want to use them to meet growing demands.”

In terms of gross domestic product (GDP), Egypt is Africa’s richest country and the world’s eighth largest exporter of cement. Egypt’s Damietta Port, like Apapa, serves as a key waypoint for imports into its neighboring countries. It is the site of a large cement terminal served by a Siwertell ST 490-F ship unloader. Mounted on a stationary turret, the unloader discharges vessels up to 30,000 dwt at 800t/h. To enhance hold reach, this unloader was delivered with a specially-designed extender, which enables the unloader to reach into all ship holds while maintaining a small footprint at an otherwise crowded port facility, substantially minimizing the clean-up phase.

“These examples of installations demonstrate that, with the right equipment, Africa can start from a more technologically advanced base, and get key dry bulk materials into the continent efficiently, stimulating growth and meeting demand. Though there are barriers, investment in modernizing Africa’s ports at this point could be a major boost to gross domestic product (GDP), delivering enormous positive change to the continent,” Hansson concludes.