Bruks Siwertell waves goodbye to Bengt Estberger, Sales Manager, Siwertell mobile unloaders, retiring after almost 50 years with the company. His dedication serves to show how knowledge and experience is so valuable when trying to find the best solution for customers.

Bengt Estberger has worked at Bruks Siwertell for 47 years, and without wishing to put too much emphasis on age, during this time he has overseen massive changes within the company, seeing it rise to prominence in the dry bulk handling equipment market.

Joining as an engineer in 1975, having attained a technical high school degree, it was not long before he began his enduring affection for Siwertell technology. “The technique of unloading represented the main advantage of the system; it was unique at the time it was invented,” he says. “The Siwertell unloader carried significant improvements in terms of bulk handling, efficiency… in many ways, thanks to the incredible advances and refinements applied since, it is even more unique today.” 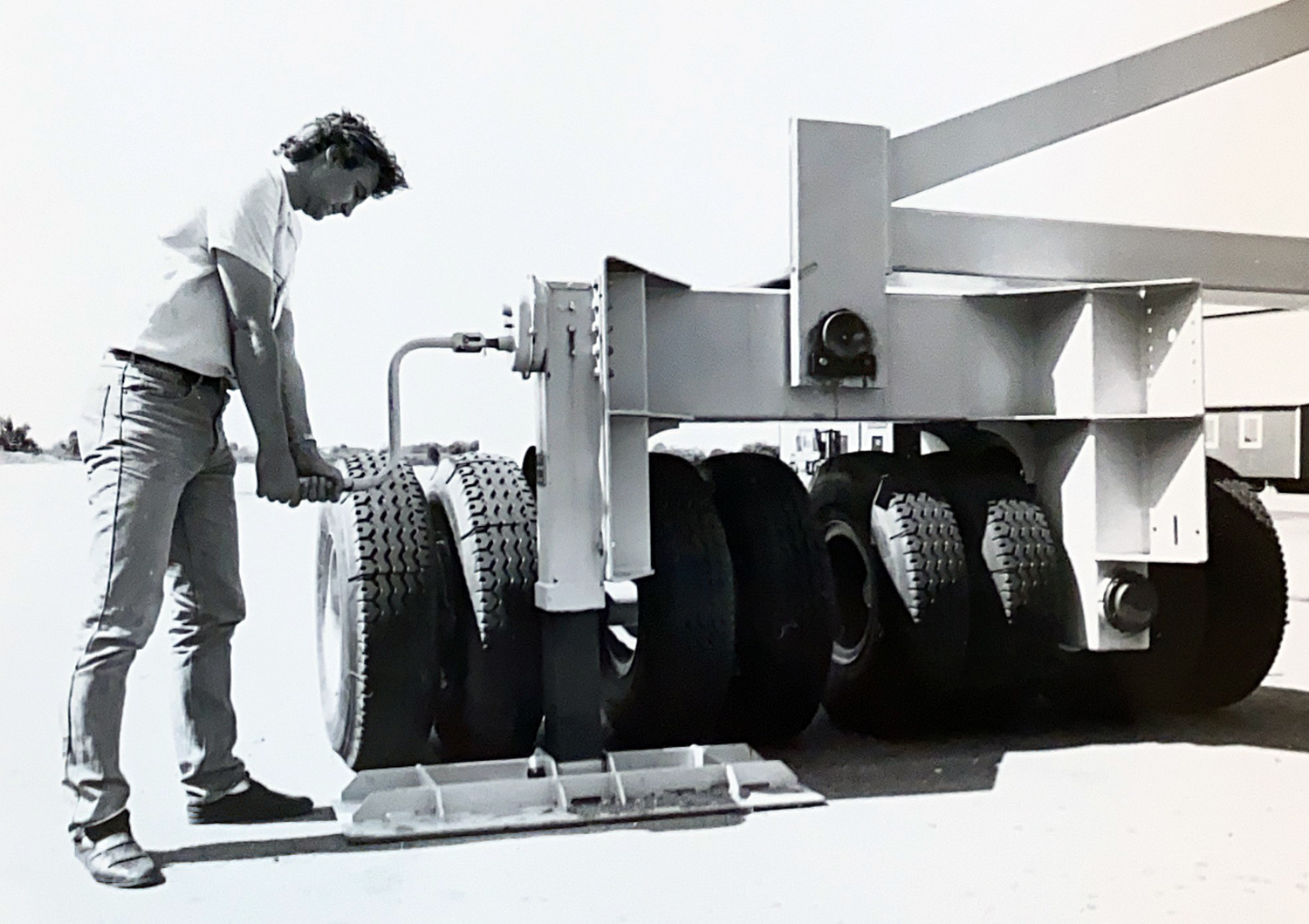 Learning under a wing

“Myself, and around a dozen others, were brought on by Johnny Argelius, then production manager for the company. Argelius definitely saw the potential in young people. We had the opportunity to combine studies and practical work in the Siwertell workshop. Later, we were promoted to service engineers, and thereafter, project and sales managers within the company.” 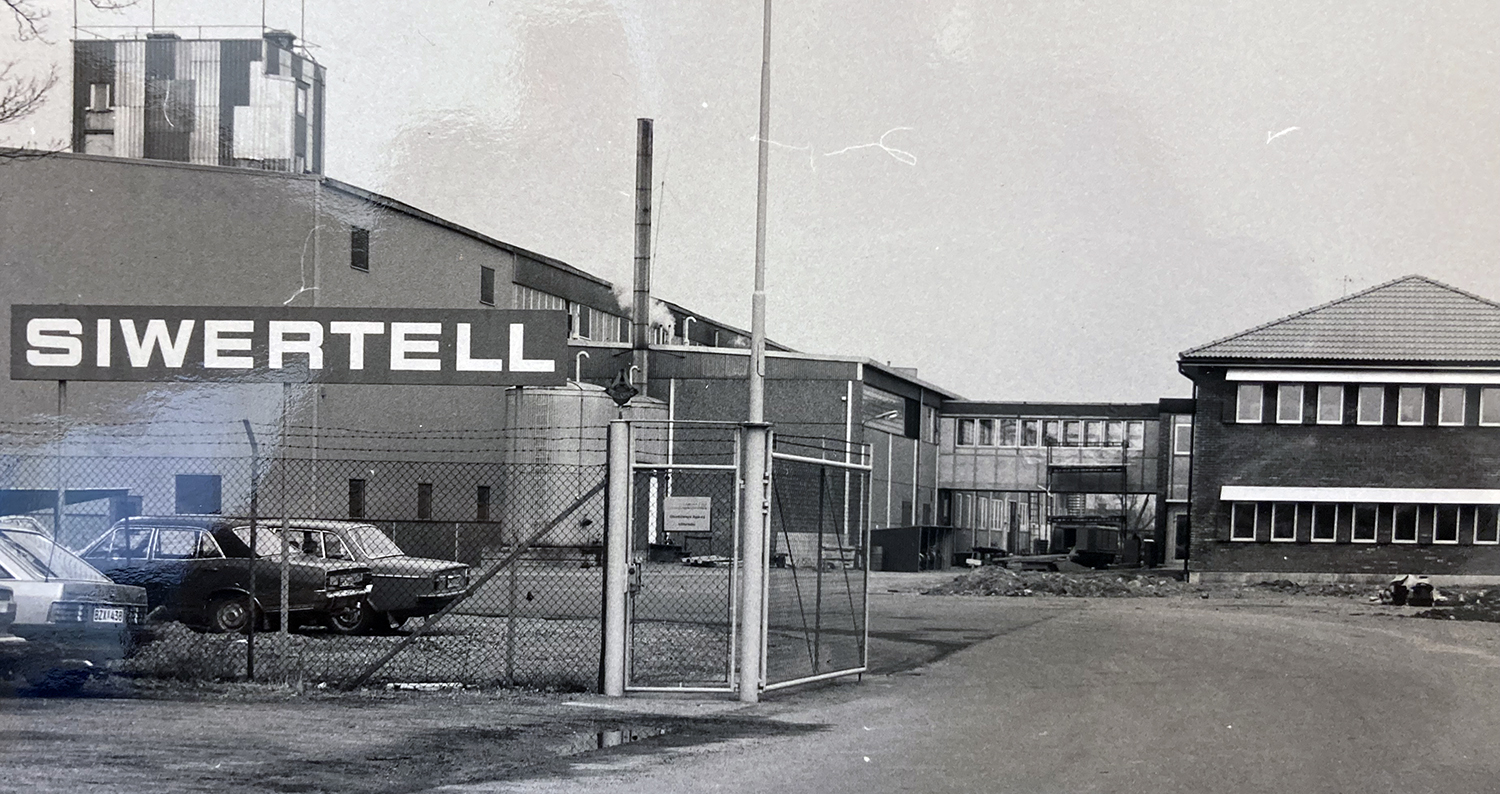 At the time Estberger joined, Bruks Siwertell had just moved to a new workshop in Bjuv, Sweden, where it would remain until this day. “The workshop has grown over the years, and it is very satisfying to see how the machines built here have come to conquer the dry bulk handling world. But here, you are in the centre of it all,” he says. “All in all, around 350 large ship unloaders have been produced and delivered, as well as about 160 road mobile units, and a numbers of ship loaders.

“Of course, the demand for capacity has increased. At that time, 800t/h was considered a high capacity, in terms of dust-free cement handling. Today we offer rated capacities of 1,800t/h as standard.”

“We can no longer say that all parts are manufactured in this workshop anymore, because building global production capability is part of our strategy, which was always our intention. It is vital to maintain this so that we can quickly get equipment to where it is needed. But we take huge pride in the finished product, as we always have.”

Estberger describes his strongest memory from the early days of working for Bruks Siwertell. “In 1980, I arrived in Jeddah, Saudi Arabia. I was 22 years old, and this was my first assignment outside Sweden.

“I was part of a crew installing a Siwertell ship unloader, including four sets of 30m vertical screw sections, onboard the floating terminal, Red Sea Cement, an old, converted oil tanker. The system was very complex, and I had serious doubts that it would work as designed. However, the Siwertell units were installed, with some challenges, it has to be said, but we were able to solve all of them.” 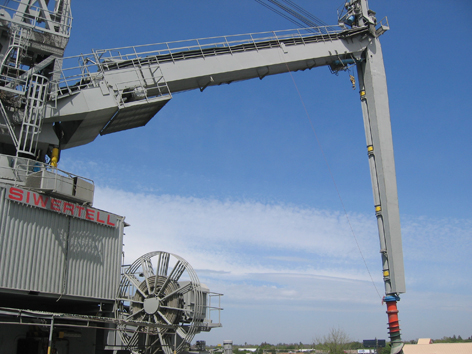 Today, the floating terminal, now named Golden Arrow I, is still in operation, and was recently overhauled. Despite Estberger’s initial reservations, the system has been a great success. “I have heard that this unloader has now operated for around 140,000 hours,” he says.

Over the course of his career, Estberger’s colleagues have been a source of inspiration.
“I honor all personnel, colleagues and management, whom I have had the opportunity to meet and work with during my years in the company,” he tells us.

One particular example, in his estimation, is the late Lennart Tingskog, the company’s first president. He saw the potential in Olle Siwersson and Gunnar Tell’s invention; to have a finer degree of control over the screw conveyor inflow, using an inlet feeder. Tingskog embodied what Estberger calls, the “Siwertell spirit”, as does Bengt himself.

“Tingskog has unfortunately passed away now, but when the idea of an inlet feeder was presented to ASEA, the company where he was construction manager for container cranes in Helsingborg, Sweden, at the time, he saw the potential, ASEA did not. He resigned from ASEA and started AB Siwertell, taking the idea and placing Siwertell on the map for bulk handling ship unloaders. It is one of the main reasons we are standing here today.” 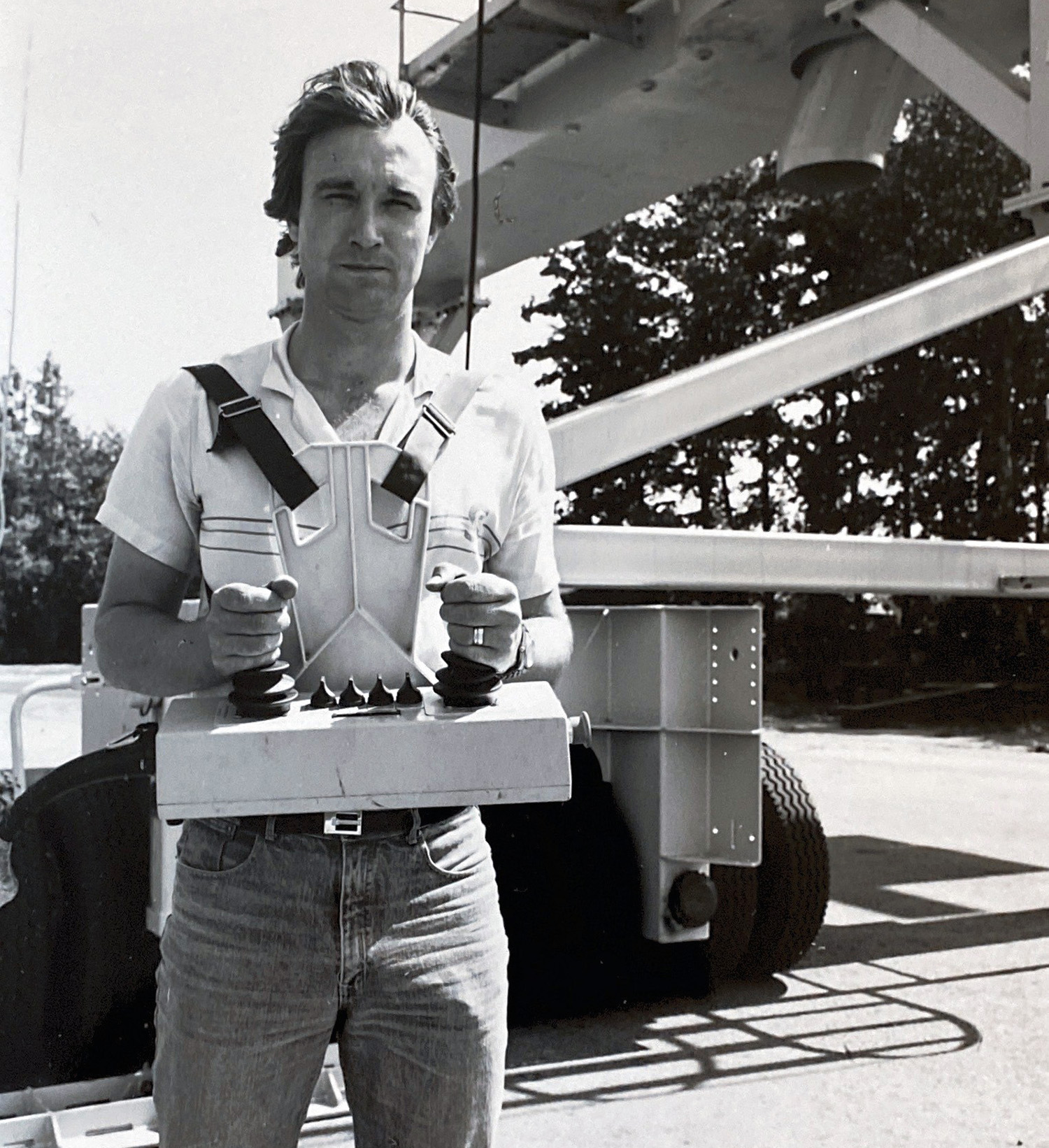 It was in following Tingskog’s example, that Estberger came upon his own inimitable contribution to the Siwertell unloader, relating to the inlet device.

“During installation and start-up of a stationary Siwertell 490-type ship unloader, handling cement at 800t/h in Hong Kong, we faced the issue of surges in material flow from avalanches of cement in the ship’s hold during the unloading operation. This resulted in the shore conveyors, behind the ship unloader, being overloaded.

“The problem had to be solved. I modified the design with a new two-wing inlet head in our workshop. The plates in the back of the wings were extended as far forward as was possible without closing the opening completely. The modified inlet head was sent to the site and installed.

“At the start-up we got 300t/h and slowly we opened up the inlet head by cutting off the plates, until we reached the center of the head. The idea solved the problem and the customer was very happy with the solution.

“The customer could operate at 800t/h, and deal with possible avalanches in the cargo hold, without overloading the shore equipment. The modified design of the two-wing inlet head still has the same design today, and is standard for new Siwertell ship unloaders that handle cement.” 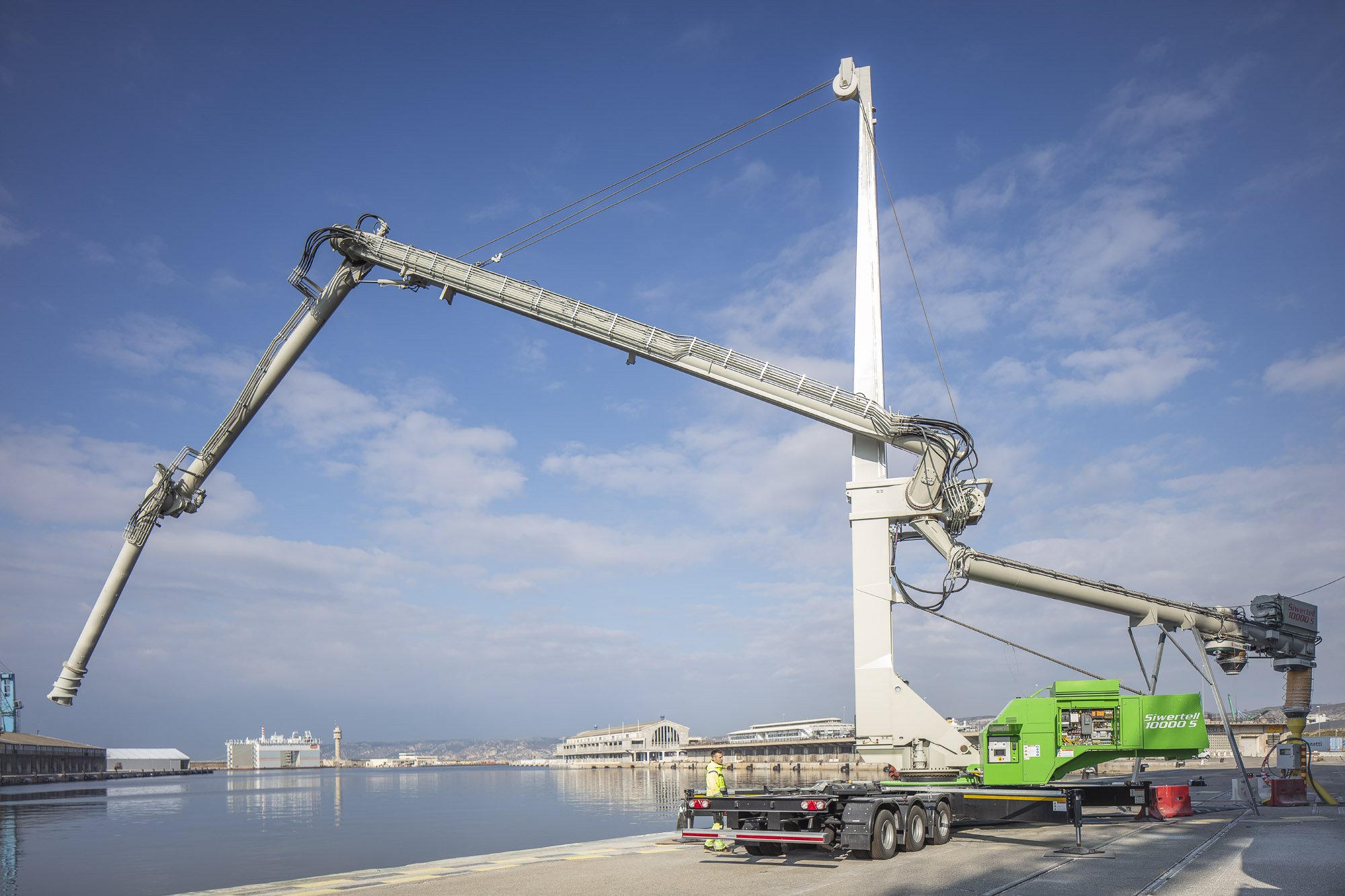 Putting on your customer’s shoes

Estberger is leaving the company, and his post as Sales Manager, Siwertell mobile unloaders, for a well-deserved retirement. “I am looking forward to much longer conversations with my wife; to improving my golf; to traveling more, and possibly fishing.”

He gives us his parting words. “I am honored to have been able to work such a long time with the company,” he says. “The heart of Siwertell remains in the same place as when I started, but today as world market leader.

“Remember,” he advises, “the customer, and what they want and need, is always the focus. Keep in mind that you are the link between them and our product. Sometimes you need to put yourself in the customer’s seat to fully appreciate the best solution.”

It is with enormous gratitude that Bruks Siwertell wishes Bengt a long, healthy and happy retirement and his wise words will remain ever-present within the company.