Around half of US cement imports are handled by Siwertell ship unloaders, and with the country preparing for a massive program of infrastructure spending to promote growth and recovery, Bruks Siwertell technology is on hand to meet the demand.

According to credit rating agency ICRA, the global demand for cement will increase by 20 percent in the 2022 fiscal year, returning to pre-Covid-19 levels. It projects that demand will be driven by a backlog of infrastructure maintenance projects, due to the pandemic, as well as rural construction projects, including affordable housing.

Globally, there are a number of reasons to expect cement demand to increase well beyond the return to normalcy in the aftermath of Covid-19. Coastal defence structures will be needed to mitigate the risks posed by rising sea levels, and for the US, a country spanning two vast coastlines, the concrete demand for these constructions will be substantial. Land reclamation and artificial islands, another growing trend in China, the Middle East and parts of Europe, will also require huge quantities of concrete.

The US is one of the world’s largest consumers of cement, with the state of Texas its biggest net importer. As of 2019, before Covid-19 and its associated market slowdown hit, the largest number of imports came from Canada, though overseas exporters Turkey, Greece and China were all in the top five.

US cement imports reached a peak in 2006; but by 2008, there had been a major falloff in consumption thanks to the financial crisis. A trend of marginally increasing imports followed, and by 2017, incremental growth in consumption had once again surpassed domestic US production. During this time, around half of the US’ cement import growth was handled by Siwertell ship unloaders from Bruks Siwertell.

Once again, there was a dip in 2020, as Covid-19 put many building projects on hold, however, the market is anticipated to recover quicker this time, and with it, a deficit of domestically produced concrete. 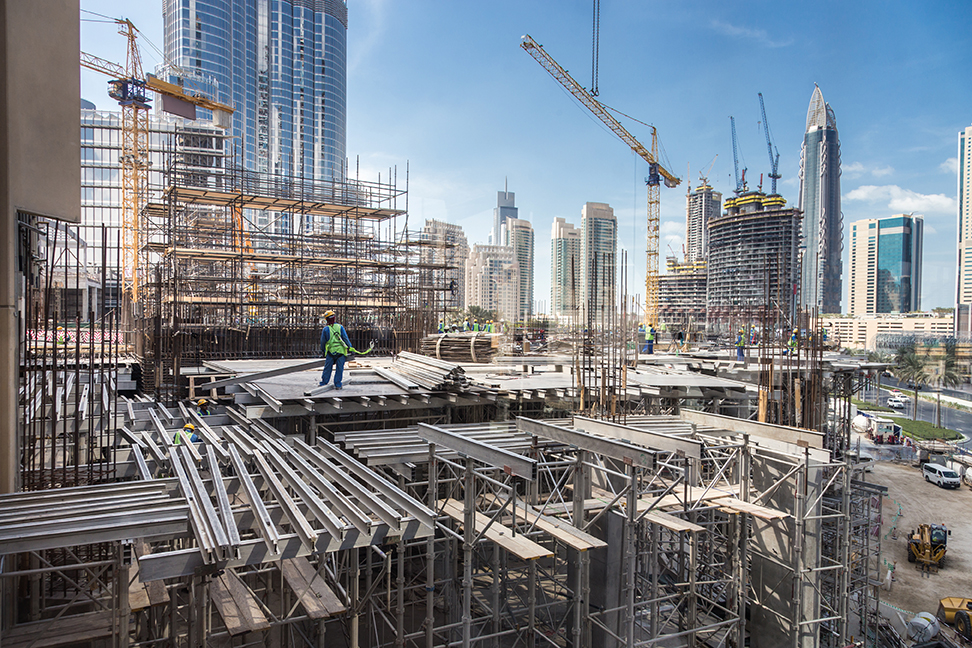 From bags to bulk

In the US and elsewhere, much of this demand will be supplied by dry bulk materials carried by ships. In Texas, Bruks Siwertell recently supported an operator’s transition from bagged cement deliveries to bulk, with the addition of a Siwertell ST 640-M ship unloader at its new import terminal in Houston.

Supplying cement locally and to other states including Louisiana, Oklahoma, New Mexico, and Arkansas, the undisclosed owner opted for a totally enclosed Siwertell ship unloader when it was time to increase throughput.

The new unit was commissioned in September 2020 and offers continuous dust-free cement handling at a rated capacity of 1,500t/h, with a peak capacity of 1,650t/h, discharging vessels up to 80,000 dwt.

“For some time, the customer had imported bagged deliveries of cement, but bulk imports hold the potential for greater market impact,” explains Per Wahlström, Contract Manager, Bruks Siwertell.  “We also delivered 192m of jetty conveyors.”

As part of the terminal’s construction, the old quay had to be repaired, and to keep renovation costs as low as possible, the unloading system had to be low in weight to minimize any reinforcement work from increased loads.

The choice of unloader was key in avoiding further costs, he adds: “It was light enough to minimize these costs, but yet deliver the through-ship capacity that it required. Performance tests have gone to plan, and the operator is happy.”

In the past, bulk cement imports have been known to be challenging work. For a powdery dry bulk material, cement can be relatively sensitive to the way in which it is handled during loading, ocean transit, unloading and onwards for downstream transport.

“Cement is specially formulated to react with water and eventually cure and solidify, even minimal exposure to moisture can pose a problem,” says Ken Upchurch, VP Sales and Marketing, Bruks Siwertell. “Yet despite this fact, open-air systems have been used to unload it in the past, meaning that it is exposed to the elements the whole time it is being unloaded.”

Moisture exposure is one issue, but arguably more pertinent ones are environmental protection from dust emissions, and the detrimental impact cement dust has on human health. Grab or bucket-chain unloaders offer little protection in this regard, and against water ingress.

In dry climates, dust emissions from cement become even more problematic. The fine particles are easily picked up by wind or stirred up by any sort of impact; cement being dropped or crushed is likely to emit a cloud of cement dust. For this reason, the best way to transfer it is through continuous dry bulk material handling, rather than a series of stops and starts. Neither bucket-chain unloaders or grabs are able to offer this, or environmental protection from dust emissions, and pneumatic systems are also limited.

Pneumatic unloaders have often been thought a good option for cement handling, and it is true that in the right conditions they are capable of high throughput; but, when materials become compacted, these machines lack the digging forces necessary to handle them and efficiency hugely drops off. They also require significant input from payloaders in the hold.

The main reason for this higher overall efficiency, compared with grab cranes for example, is that at the beginning of an unloading operation, the grab only travels a very short distance to reach the cargo. However, as more bulk material is unloaded, the greater the distance the grab has to travel, into and out of the hold. Therefore, the efficiency progressively decreases.

In contrast, a Siwertell screw type unloader maintains continuous unloading at a steady discharge rate, regardless of the level of cargo in the hold, right up to the hold clean up stage. It also picks up material below the cargo surface, avoiding any hold avalanches, with a counter-rotating inlet device.

Further adding to its efficiency, a Siwertell unloader can reach right into the corners of a hold, offering an additional advantage over pneumatic unloaders and other systems. This results in quicker vessel turnaround and reduced berth occupancy.

The first screw-type Siwertell ship unloader was supplied to the cement industry in 1975. In 1980, Bruks Siwertell set a new standard for the industry by introducing the 800t/h Siwertell unloader to the market and since then, it has continuously set the highest bar. Today, Siwertell cement unloaders offer continuous rated capacities in excess of 2,000t/h.

Bruks Siwertell has long-standing references for cement handling in the US. In 2004, Houston Cement Company, in Houston, Texas, was beginning to plan a new, larger terminal. The company was expanding and looking for an efficient, environmentally friendly, high-capacity method to discharge increasing volumes. It could sell more cement than it could import, and needed to replace an existing pneumatic ship unloading system.

In 2006, a rail-mounted Siwertell ST 640-D unloader, designed to offer cement unloading rates of up to 1,500t/h, was delivered to Houston Cement. Once commissioned, performance tests revealed impressive results: the ship unloader met the guaranteed rated capacity and actually exceeded it to deliver 1,646t/h. The through-ship capacity was also in excess of the guaranteed rate of 1,050t/h and energy consumption tests, achieving 0.39kWh/h, were surpassed as well.

Optimum efficiency at the Houston Cement terminal is also ensured by the jetty belt conveyors being longer than the vessels the terminal receives. This allows the ship unloader to move past the bow and stern of the vessel and for the ship unloader’s conveying arm to pendulate at an angle into the furthest corners of the vessel, particularly in the forward hold, under the deck and hatches.

The entire system is enclosed from the vessel to the jetty conveyors, via a moveable transfer trolley, and through the terminal’s 100,000 metric ton capacity storage silos.

The unloading rates offered by Siwertell technology at Houston Cement set a new world record, and were so far ahead of the market that the unloader remains extremely competitive today. At the time, it was also the largest Siwertell unloader dedicated to cement.

The unloader has now handled more than 10 million metric tons of cement. Its high-capacity capabilities meant a reduction in unloading days of 50 percent, translating into a 50 percent reduction in berth occupancy and the possibility of higher annual intakes; return on investment was achieved in less than two years.

The Houston Cement installation has gone on to be heavily influential in Bruks Siwertell securing other cement handling contracts in the US. In 2019, the company delivered a high-capacity Siwertell ST 640-M screw-type ship unloader to South Texas Cement’s terminal in the US port of Corpus Christi, after being contracted by cement handler GCCM Holdings LCC. It, too, is capable of 1,500t/h throughput.

The specifications for the choice of unloader were stringent; aside from the expansion in throughput, GCCM Holdings LCC and South Texas Cement also discussed through-life maintenance costs and electrical demand, both of which were deemed to be lower for a screw-type unloader than a pneumatic system of equivalent throughput.

“When combining all of the deciding factors that led to choosing a mechanical unloader, it was apparent that Siwertell was the best fit for our needs,” said a GCCM Holdings and South Texas Cement spokesperson at the time of the order. “We especially like the high rate of unloading combined with the versatility to handle various ship sizes.”

Last year Bruks Siwertell was awarded a contract to supply the US-based Colonial Group with a new high-capacity Siwertell 490 F-type ship unloader. The fully enclosed system will deliver dust-free cement handling for the company’s Savannah, Georgia, terminal and supports Colonial’s cement import growth. The unloader is planned for commissioning later this year and will offer a rated cement handling capacity of 800t/h, discharging vessels up to Panamax size.

Not all imports will be handled at dedicated terminals, however, and the complex dynamics of the construction industry leave some operators seeking a more flexible approach. “We have seen an influx of interest in Siwertell road-mobile unloaders, specific to the cement industry, as cement demand continues to rise,” says Upchurch.

Siwertell road-mobile unloader orders were secured in the US last year and this trend is continuing. Most recently, Bruks Siwertell secured a new Siwertell road-mobile ship unloader order for cement handling operations in the Gulf of Mexico region of the USA. Its new, undisclosed owners already operate numerous Siwertell screw-type ship unloaders, recognizing their ability to protect the environment from dust and spillage, and to offer a cost-effective dry bulk handling solution, with low operating costs in comparison with other technologies.

“During his election campaign, President Joe Biden pledged to ‘build back better’, and recent reports suggest that there may be as much as USD 1 trillion on the table for roads, bridges, rail, and other infrastructure,” notes Upchurch.

“This is very encouraging news for the US, and clearly, it will need a lot of cement to make these plans a reality. Whatever strategy importers adopt for meeting this growth, our US cement handling deliveries, and installations across the world, show that Bruks Siwertell will be with them every step of the way.”

Millions on the line: compare the right figures