In 2005, the Houston Cement Company LP enlisted Siwertell’s expertise in bulk material handling to provide a solution capable of meeting such high-capacity unloading demands that it required setting a new industry standard.

“The heavy-duty unloader was, and still is, extremely well-suited to meet the terminal’s high annual throughput needs,” says Peter Göransson, Siwertell Sales Manager. “The low cost of maintenance and its low energy consumption has further added to its suitability.”

At the time, an unloading rate of 800t/h; introduced by Siwertell in the 1980s, was regarded by the cement market as an informal industry standard for mechanical ship unloaders. To handle the 1.5 million metric tons of cement, which is imported and distributed by the terminal each year, Houston Cement required an unloading solution capable of delivering a discharge rate which far exceeded this standard.

In response, Siwertell delivered a rail-mounted Siwertell type ST 640-D unloader capable of delivering ground-breaking unloading rates of up to 1,500 t/h; the highest capacity on the market for its kind at the time.

The unloader was commissioned in July 2006 and began commercial operations for its cement import terminal, located in the Port of Houston, USA, the following month. Over a decade later, the Siwertell unloader still meets the terminal’s high-capacity unloading needs.

Freight and demurrage rate turbulence in 2005 meant that Houston Cement Company sought a solution to increase the terminal’s import capacity. It was initially in contact with other providers, but the Siwertell unit’s unrivalled unloading rates, high through-ship performance and low environmental impact secured the investment.

“Prior to delivery of the unloader, the terminal was maxed out at about 1,000,000 metric tons/year and was very difficult to manage logistically due to the size of our ships, the size of the storage domes and the numerous suppliers we were utilizing at that time. We needed increased throughput and increased storage options,” explained Jim Gatens, President of Houston Cement Company, when he reflected on the Siwertell installation in 2018.

“Although we previously consulted with other manufacturers for information on their unloaders, no other unit could provide the high capacity rates we were looking for. We were also already familiar with Siwertell machines, which helped fuel our decision to invest,” he added.

Looking back at Houston Cement’s unloading operations, Mr Gatens said the terminal has functioned as advertised and has performed very well. “It has done everything that we hoped it would.

“We have seen ships with 48,000 tons of cement unloaded in less than three days with the Siwertell unit and most unloading operations are performed at over 14,000 metric tons/day.”

When it was commissioned, the terminal was considered state-of-the-art; asked if it still warranted this description, Mr Gatens replied: “I think it does.”

He said that the terminal has proved to be cost-effective and worthy of the additional investment in the Siwertell high capacity unloader and it had regularly exceeded its projected discharge rates. “It can comfortably handle cement with varying characteristics,” he said. “Upon initial start-up of the Siwertell unit, it was discovered that the machine would unload well over the 1,500t/h mark. The entire machine itself had to be cut back by about 20 percent as it could easily discharge at over 2,000t/h and more.

“Cements from the different suppliers have different discharge characteristics; some can be discharged at a higher capacity than others – more than likely due to the fluidity of the product. By using the speed setting on the inlet device, it is possible for the terminal personnel to compensate for the different cements while still achieving a desirable unloading rate. The Siwertell unit itself is also designed to unload the cement at a consistent rate by varying the speed on the inlet device depending on the amp load of the vertical conveyor. This, for the most part works well, but there have been times when we have seen momentary spikes well over 2,300t/h.” 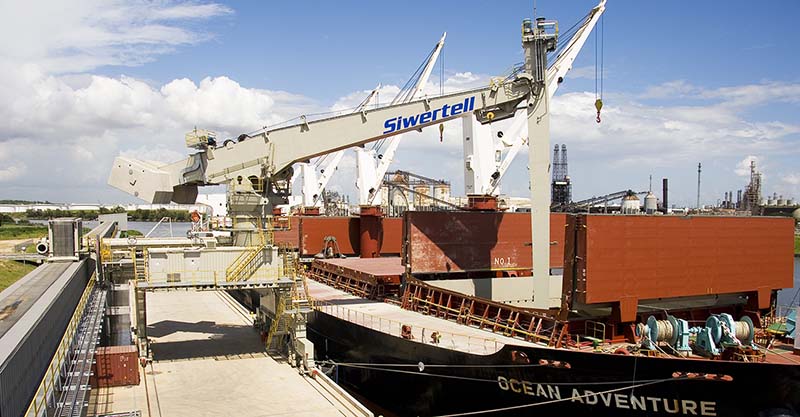 In 2014, Houston Cement Company took the decision to update the computers, software and computer system wiring.

The unloader is equipped with Siwertell’s monitoring system, known as SIMON; a PC-based human machine interface (HMI), which provides a continuous stream of operating data, on-screen maintenance instructions and full operation and service manuals. Applicable pages can be printed out to aid maintenance.

“The HMI offers a great advantage while unloading, as both the progress in the holds and the alarms can be tracked,” noted Mr Gatens. “The system is very user-friendly and has an attractive feature that allows us to add completed maintenance tasks to a log. SIMON monitors equipment hours, which lets operators know when maintenance is due. It is also capable of identifying fault locations in the electrical switch gear, as well as the monitoring of all motor amps and important data.”

“With regard to the small amount of problems we have had over the years, Siwertell experts have provided swift assistance. Their field representatives are all extremely knowledgeable and competent,” he said.

“The mechanical engineer is local to the terminal and is extremely knowledgeable in every aspect of the maintenance and repair of the unit. He will always answer any questions that we may have and assists us if in the area. The electrical engineer is also very well-versed with the onboard electrical systems and, as with the mechanical engineer, will always respond in a timely manner if we encounter a problem. The support of these two Siwertell representatives has been excellent.”

Standing the test of time

The terminal today is basically the same as it was upon commissioning, but now has a revised truck-loading system and the addition of six lump crushers – one at the discharge point of each of the storage silos, which have capacities up to 100,000 metric tons in total.

For transferring the cement to the jetty belt conveyor, the Siwertell delivery included a movable transfer trolley. The fully-enclosed trolley is connected to the feeding conveyor and moved along the shore conveyor by the ship unloader. It is equipped with a set of wheels travelling on a rail profile attached to the shore conveyor.

A dust collector is built onto the trolley, ensuring the transfer takes place under negative pressure to prevent emissions from escaping the system. “This arrangement is unmatched by any other technology currently on the market and is the only way to achieve high ship unloading efficiency while maintaining environmental safety. The movable transfer trolley design includes versions for screw or belt conveyor receiving systems,” Mr Göransson notes.

And for the future?

Houston Cement is also noticing this pick-up in the market, which is why it took the decision in 2018 to add a fourth truck-loading point to increase capacity in this area. “The limiting factor for the terminal was how many trucks could be loaded, not how fast it could unload a vessel.

“We are confident that the ship unloader is more than capable to handle future increases,” said Mr Gatens. “If we were considering a similar new terminal today, probably the most significant change would be the addition of more truck loading bays. We have discovered that it is much easier and faster to put the cement in than to get it out. Also, seeing as the cement can be moved well at the 1,500t/h speed, we could possibly consider going to an even higher unloading rate.”

Consign crushed grains to the past